This is the first of 16 blogs discussing the patterns of tactics mentioned in my power and control wheel – One-Sided Power Games. 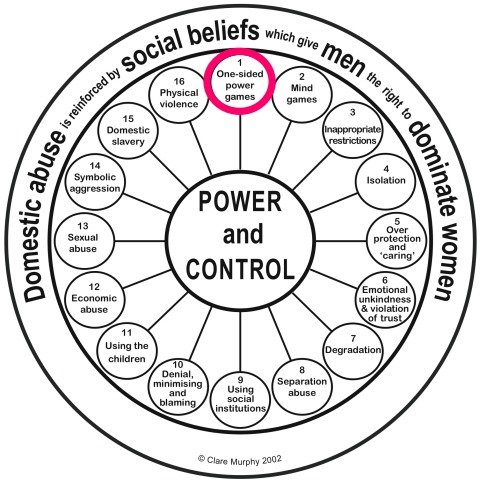 Research with men and women reveals that men who engage in one-sided power games show more concern about gaining something for themselves than showing concern for what they are actually doing to their partners. In other words – what matters to him is not what he does, but the benefits he gains. There are multiple one-sided power games played by a person determined to maintain power and control. If one tactic does not work, he will merely change to a new tactic.

When I interviewed the men for my PhD research I asked why they’d bother committing to a monogamous relationship if they were so keen on playing the field and seeking sex from multiple partners. I was so surprised when most of the men said they wanted to build a life-long caring relationship. Several of the men said their partners were their best friends. And it was her they wanted to turn to for support when they were jailed, or punished in some way for abusing her.

I also posed the question, “If men took an unwritten contract into marriage what would it say?” All the men said things like:

The unwritten contract would say: “I can do what I want but you gotta do what I tell you to. That’s the way I’d see 90 percent of marriages, from a man’s point of view.”  (Bill)

“Most guys would like their wife or partner to be subservient to them. And be agreeable with the ideals of the husband.” (James)

The man should “have the final financial decision and the final direction for the family.” (Brendan)

And Sam said that in the past he used to believe that women “had to be a slave.”

These are examples of one-sided power games where: He makes the rules, he makes all the big decisions and he has the last word.

Ruler of the castle

Indeed these men’s views of how a marriage should operate fitted with women’s experience of being dismissed and disregarded as an equal partner. Several women I interviewed said their partner had to have the final decision about everything, and regularly ignored them if she had something to say. Susan said her partner “made the major decisions and if any were decided jointly, he did things his way in the end”. Pauline’s husband treated her in such a way that meant she had no right to have judgements or make decisions. On the other hand, Karen made the major decisions such as where to live – however, ultimately if Felix felt a decision needed to be blocked he’d block it.

His wants are most important – He does most of the receiving

Lazarus, a man I interviewed, was of the opinion that the unwritten contract that most men take into a relationship states: “Trust, honour and obey.” Then he added, “Although if I said the ‘obey’ bit, the missus would get upset [and say] ‘You’re not my boss’.”

Other men said the unwritten contract would say, “Do as the man says” and that men can be very domineering. Max said, “We want it our way. Our way or the highway girl.”

Geni said he’d “Think the majority of men would think the wife is like the doting little servant, slave, there to do everything” and that when the man comes home from work in his suit and drops the briefcase “he expects the beer there and the meal on the table.” When this expectation is not met, men say they feel disrespected as a man, that the failure of the woman to carry out her feminine role hurts a man’s pride.

From the women’s experience, Elsie said that everything she and her husband drank, ate and did, including sex, was mostly what he wanted and the way he wanted it. He made all the decisions for his own benefit and nothing else mattered. Whatever these men want takes precedence, therefore the men get most of the receiving.

Victoria said it was vital she ensure her partner’s needs always came first. It had to be his way first and then, maybe, he might think about doing something for Victoria. When the couple went to marriage guidance, Graham agreed with things the counsellor said, but when they got home he said that what the counsellor said was, “All rubbish and that he was not going to f…ing do that, she doesn’t know what she’s on about that woman”. This is a common experience women tell me in counselling. Their partners may say they love her, want the relationship to improve, so agree to go to counselling, but the role they are playing is a major way in which such men gain any sense of self-esteem. Counselling inevitably means having to face feelings these men spend a lifetime denying.

So, these men continue to ensure that all the attention centres on themselves

Elsie’s husband Leon was jealous and aggressive toward his new-born son. From then on there was a huge increase in abuse. All the attention had to be centred on him. He yelled at the baby when it was one week old telling the baby that it had to shut up and not start running the house. To gain further understanding why men engage in these one-sided power games you can read here and here.

Wearing the mask of the Master, he monopolises the woman’s time and energy

An extremely common tactic of the one-sided power game entails the man monopolising the woman’s time and energy. Most women experiencing control by their loved-one say their partners make many promises but never deliver. Susan said that her husband took no responsibility for fathering or household duties and he told people that he had a lazy wife. Yet Susan was overburdened with responsibility, which included being in charge of the finances – which he continually sabotaged.

Most women I talked to expected equal role sharing when they began living with their partners. But, as Karen said:

He has his own selfish way at her expense

Donna said that everything was about what her partner Frank wanted. And what Frank wanted, Frank got. His pattern was to get his own way at her expense, for example, he ate steak three meals a day, gave steak to his friends, yet Donna’s sons were made to eat mince and sausages. Teresa said that if she disagreed with Patrick or said “no” to sex, he would get really angry, nasty and sulk for days. Likewise, if Susan’s partner did not get his own way he would ignore her or disappear for days or weeks at a time.

Raewyn said there was a great deal of pressure to act, think and be like her husband because he said his way was the only and right way, even though his behaviours were not always congruent with his philosophies. Sally said the exact same things about her husband.

He determines how, when and what things get communicated

Karen’s partner Felix would pull a blanket over his head and hum when Karen wanted to communicate. He would always say that Karen was wrong and that the opposite of what she said was true. Pauline’s husband always avoided talking about issues, he never raised his voice or got angry. Sally said that because her husband would not take responsibility for his behaviours she would get angry in an attempt to be heard and to resolve issues. But . . . then he would say the problem in the relationship was her anger. He always refused to answer the phone, which meant Sally could never get hold of him if she was away from the house. Victoria said that nothing was open to discussion unless it suited Graham’s needs. He walked away when Victoria wanted to talk or he would respond with, “I don’t know” over and over.

His previous marriage makes him right and her wrong

Teresa had a high public profile job working under her intimate partner’s management and they both earned good money. When they first met, Patrick was seemingly happily married with a baby but he pursued Teresa relentlessly, yet blamed Teresa for his marriage break up. When Teresa and Patrick separated he pursued her relentlessly again. Because Teresa had not been in a relationship before, he controlled her by insisting that she knew nothing about relationships, and that he did. Likewise, Sally’s husband claimed to be always right. He, too, had previously been married for ten years and insisted that he knew how to have a relationship, that Sally did not, and he therefore knew best.

And the result of one-sided power games?

As you can see from men’s and women’s stories, one-sided power games don’t always entail physical violence for the man to ascend to the  superior gender status and get the rewards society tells him he deserves. It doesn’t take physical violence for him to ensure she descends into a downward despairing spiral and a position of servitude.

The irony is that men are not truly getting what they really want either – which is safety, trust and a caring connection.

“Not everyone is safe and free. Huge numbers of people live in fear. Trapped, devastated, psychologically in pain. Isolated by perpetrators who are not free either. Masked, driven control freaks lashing out; unhappy like their victims. They emotionally abuse as a way to cover up vulnerabilities and social pressures about having to be society’s dominant version of masculinity. But when they get real – and slip their quest for power and control – they have to admit they are not truly free or safe themselves.”