This is the fifth of 16 blogs discussing the patterns of tactics from my power and control wheel – Over-protection and ‘caring’. 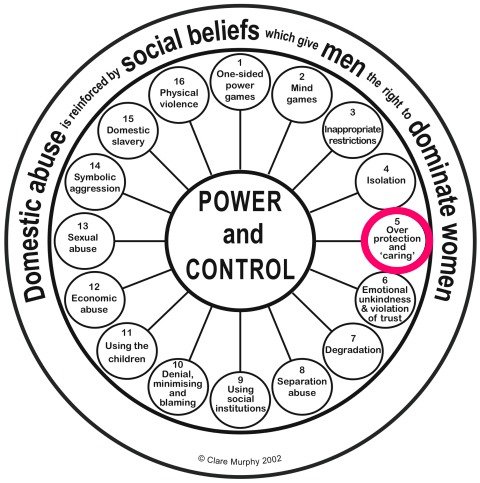 Many men who psychologically abuse and control their female partners do not define their behaviour as cruel or abusive. This is partly because their behaviours make perfect sense when viewed from their belief system – their socially reinforced belief system. Family violence including non-physical control tactics are motivated by beliefs based on – men’s sense of masculinity – their gender as a man – that is, the ways men have learned that they should behave in relationship. Men seeking to change by attending counselling or stopping abuse programmes describe being motivated by beliefs such as:

These kinds of beliefs lead to behaving in over-protective ways in the guise of caring. This includes begging the woman not to go out alone or she might get raped, telling her she never has to work (even though she wants to) because he wants to take care of her, taking her to and from work so her co-workers will not get ‘ideas’, or attempting to keep her at home by saying he worries when she’s away.

Women I interviewed for my Masters research gave some examples of experiencing over-protection in the guise of caring:

Sally said, “There was one group I went to for a year, a women’s group, which Dylan didn’t like me going to and he did try to stop me quite a few times and I did stop going when he tried to stop me.  I would do what he said and I would be confused about that because he would say some rational thing like ‘because it’s really bad weather out there.  I don’t want you driving’ and because I was nervous at driving myself, I wouldn’t drive.  I wouldn’t go to this women’s group.”

Karen said, “I did have access to the car then, that’s right I claimed it (laughter). I remember for a long time Felix would say, ‘Those roads are far too dangerous, you haven’t got experience, it’s not warranted or registered, we could be in real trouble if you stuff up out there’. I’d say, ‘How about we warrant and register the car and get it insured?’ ‘Oh we don’t have enough money for that.’ It was his vehicle, he bought it, he was the one who fluffed over it. I was asking a favour of him by wanting to use it. I was really really sick. I was really depressed and I think quite mentally ill at that stage. I knew I was and I do intermittently get convoluted in my head space. That was the worst state I’d ever been in.”

Possessive jealousy in the guise of ‘caring’

When men operate from possessive jealousy, many women perceive this to be a sign of love and commitment – especially during the dating and early phases of the relationship. However this is a notion learned from places such as fairytales, romance novels and movies – it is absolutely not true. Jealousy is about the jealous person’s own beliefs. At the personal level, a jealous man’s feelings stem from beliefs about himself such as believing he’s inadequate, unworthy, or not good enough. At the social level a jealous man’s feelings stem from the belief that as a boyfriend or a husband they own their female partner.

Belief that marriage implies men’s ownership of female partners can be traced back to ancient Greek and Roman times. Manuscripts dated during the medieval period (900-1300) state that the Church, for instance, pushed for the idea that women should obey their husbands, and men were granted the authority to castigate their wives and beat and otherwise control her to correct her behaviour.

Whilst men’s sense of ownership of their wives has been played out for centuries, not everyone has always agreed with this form of relationship, and for the past 50 years there have been consistent major challenges – by men and especially by women – to dismantle such inhumane forms of relationship.

The problem is that gender socialisation in western societies continues to be steeped in subtle (and sometimes very obvious) social support for men’s ongoing ownership, control and enslavement of intimate female partners.

Some of the men I interviewed for my PhD research talked about love being linked to ownership and the socially reinforced double standards accompanying such beliefs. Alex said he used to think “love was an ownership type of thing, you love someone you’re with them 24 hours a day.”  David said that a man, “loves his wife to do everything that she’s told to do, and be obedient.” James said “most guys would like their wife or partner to be subservient to them. And be agreeable with the ideals of the husband.” Sam said he used to believe that women had to be a slave. Bob said the husband was entitled to sex every night because “That is really part of the culture.” Bill said that men marry “to tie up the mini me (laughter). Get her off the market… Men want to go back to the market and the women can’t. I dare say that’s 99 percent of men.”

Donna said, “once I started having sex with him and he was madly in love with me he started displaying his jealousy and his possessiveness.”

Heather said, “Luke was just ultra jealous about anything especially my ex-husband. I think one of his main things that he was jealous and that I was close to our son and that we were away from him having that time together.”

Harasses her about imagined affairs

Susan said, “When I was living at dad’s it was good coz I had my money every week and I had the support and then Anthony came down and accused me of playing around on him. And that wasn’t me.”

When she is out, he is extremely jealous

Heather said “Luke used to complain about the clothes I wore, said I dressed like a whore, didn’t like the way I had my hair because I attract the guys, that I wear fuck-me pants and just want to get guys after me. And if I wanted to take our son to the beach, Luke would pass a comment, ‘Oh you just want to go to the beach and flounder around in your skimpy bikini in front of guys.’ In the end anything I put on I was thinking ‘is this looking tarty?’ I got to the stage when I thought I really should change my hair colour, even though I’ve had this hair colour my whole life.”

“Even if I stopped and talked to a guy he’d say, ‘I’ll poke his fucking eyes out.’ He was really anti. We were in the supermarket and a friend of my cousin’s was there and we stopped and talked and he goes, ‘What took you so long, the supermarket’s only across the road?’ I said I was talking to Joey and he said, ‘I can see that.’ I just stepped back. I felt like a little child being told off. At the supermarket if someone asked me where the bread was Luke would say, ‘Why didn’t he fucking ask me where the bread was he’s just trying to get into your pants.’ It was constant. So I didn’t even talk to a person let alone look at them when I was in his company. And I never would tell him if I saw any guy and spoke to him.”

Teresa said a warning sign that something was not right was Patrick’s “constant wanting to know where I was and what I was doing, which started right in the early stages in the relationship, the ringing up and checking all the time, from home, from work, from everywhere. Sometimes at midnight to see if I was there, or to make sure that no-one else was there.”

Heather said, “I didn’t really know what Luke expected of me. Even now you kind of think, coz he’s built this belief into me, ‘how am I coming across, does it look like I’m flirting with this person?’ You’re analysing everything you do coz I think I don’t want to come across like that, ‘Am I coming across like that? I don’t want to talk too much to this guy, he’s married.’ Really silly things you wouldn’t have thought of before.”

Raewyn said “Brian was jealous of me teaching art because he would make it very difficult. He would never comfort the children when I left. He would never try and keep them happy when I left, they would be screaming at the door. When they were younger they would be crying and he would do nothing, but I would never say anything. In some ways it was more to protect myself because I didn’t want to have a big fight about it, but yeah I knew he didn’t like the fact that I was teaching art, so I didn’t make a big issue of it either because I didn’t want to make him feel even worse.”

Believing in Knight in Shining Armour stories can lead to confusion for some women when their partner tries to stop her from leaving the house for fear she will be harmed. Early in a relationship this can sound charming and be thought of as a sentiment that means he loves her. It is often only after months or years of an ongoing pattern of feeling controlled and restricted that some seemingly innocent behaviours start to become of major concern. It is important for women to trust their perceptions about their partner’s motivations. When women are continually being blamed for making their partner jealous – yet are not actually doing anything that is dishonest or untrustworthy – it is important that the woman not doubt herself – that she does what it takes to maintain a belief in her own integrity.

It is important that men be honest with themselves about their beliefs, feelings and needs

Many men’s possessive and jealous behaviours are motivated by beliefs that they have to stay on top, otherwise they believe they will fall prey to condemnation from others (often other men), many believe that they are a failure as a man if they do not appear to be ‘wearing the pants’. Some men have experienced bullying by other men aimed at shaping this kind of masculinity, so to avoid victimisation they do what it takes to show their masculine prowess for the sake of being accepted by other men. And if there are no other men to prove this to, some men have learned that controlling women and treating them as possessions is a way to feel they have succeeded.

But many men want a caring relationship. But a relationship is about team work – doing what it takes so that all team members can flourish. When one team member (in this case the man) plays by a set of rules that controls and restricts the other team member so that the man comes out the winner – that’s not only destructive for the woman – but it is also destroying the man’s sense of wellbeing and happiness. It is also destructive for any children growing up in this atmosphere. Sam, one of the men I interviewed, said that challenging peers to stop controlling, abusing and using women “does cross your mind” but what “does play on your mind more is that my mate can’t see that soft side.” And here’s the paradox – ‘real men’ are supposed to have courage and strength – yet many don’t use that courage and inner strength to stand up against social pressures to control the women they love – because doing so has been labelled “soft” and that’s not manly.